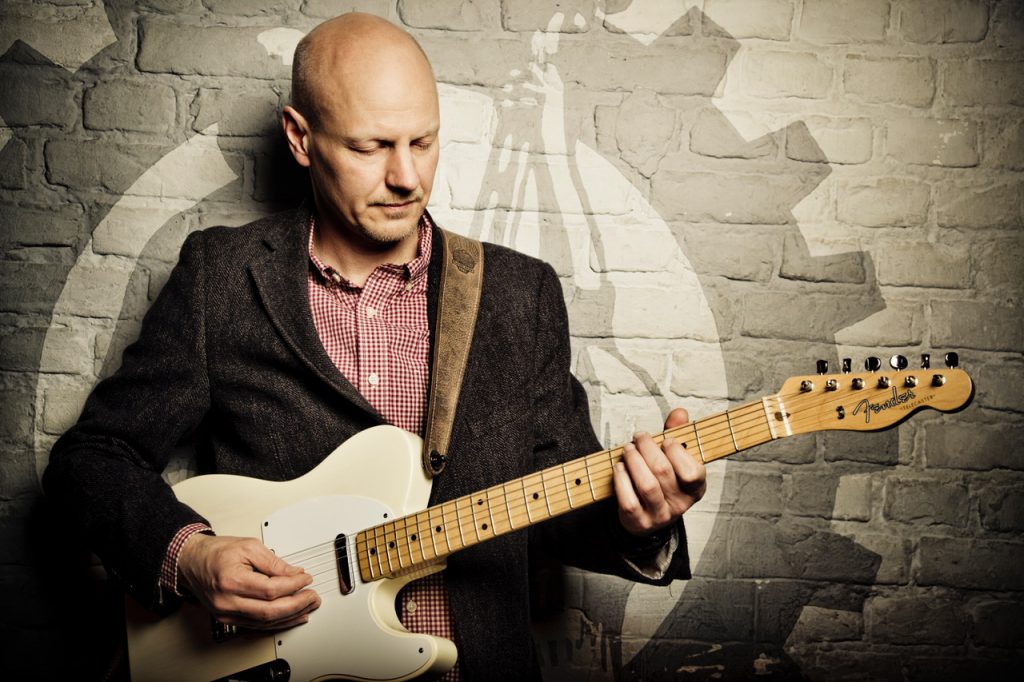 JazzBluesNews: – First let’s start with where you grew up, and what got you interested in music?

Marcus Klossek: – I grew up in Essen, Germany. When I was around 12 years I picked up the guitar, because friends of mine played already a bit and we were listening a lot to Blues and Rock stuff like Albert King, Muddy Waters, John Lee Hooker and many more.

I guess that’s where it all started for me. The guitar was not just an instrument to me, it was an almost iconic symbol of everything that was about to happen. 2 or 3 years later I heard Miles Davis’ Kind Of Blue and that did it! I became a jazz snob, trying to learn jazz standards and going to play on jazzsessions in town as often as possible. That was a great experience for me and I wanted to go further, so I started to study Jazz guitar in Amsterdam, Holland.

JBN: – How did your sound evolve over time? What did you do to find and develop your sound?

MK: – When I started to listen to guitar players like Jim Hall for example I had no idea about how to play right over chordprogressions and so on, but I heard his SOUND! Or the SOUND and VIBE of  great tenor sax players. So I think I was always conscious about my own sound, but at the same time just let it evolve naturally without worrying about it too much. 10 years ago or so I switched from the typical Gibson ES175 / Polytone hookup to a Telecaster guitar and stayed with it ever since. I think I prefer the longer sustain and clarity yet warmth of a guitar like this, sounds more feminine to me somehow. All that said, I think everyone has got his or hers own sound, no matter what instrument, you just need to find it.

JBN: – What practice routine or exercise have you developed to maintain and improve your current musical ability especially pertaining to rhythm?

MK: – Well, I have a daily practice routine from 2 hours minimum up to more hours depending on how much time I have. First I start with some Bach and Paganini stuff for some minutes like Sonatas and Partitas, just to see if everything works and to get me in a musical mode. Then it might be a scale, arpeggios, triads or a chord- rogression I need to solo over. I’m practicing very song oriented, so I can really use the stuff over the tunes I play. In terms of rhythm I’m into Polyrhythms at the moment, that’s very challenging for me. Everything I practice is a little bit out of reach for me so I’m still feeling like a complete beginner all the time, but in a good way, I’m still curious! This has not changed since I was 12 years old. When I’m in a phase of writing new tunes i’m not practicing at all, I’m just writing. Not even listening to other music because it can distract me from my own ideas.

JBN: – Which harmonies and harmonic patterns do you prefer now? You’re playing is very sensitive, deft, it’s smooth, and I’d say you drift more toward harmony than dissonance. There is some dissonance there, but you use it judiciously. Is that a conscious decision or again, is it just an output of what goes in?

MK: – Yes, sure, I love harmonies and great sounding chord-progressions. The same applies for melodies: both in composition and improvisation. Playing melody after melody after melody in a solo is one of the rarest quality in music. And yes, I like to add some dissonances in my playing and disregard “rules” from time to time. I do this consciously, just to add some more spice I guess.

JBN: – What do you love most about your new album 2018: Marcus Klossek Electric Trio –
Taken From The Skies, how it was formed and what you are working on today.

MK: – I’m always asking myself: What would the music fan inside of me like to hear? So I started to write tunes and I realize them with my fellow musicians, the Marcus Klossek Electric Trio. “Taken From The Skies” is our third album, this time strengthened with saxophonist Finn Wiesner, a friend and fantastic musician I’m playing with since 20 years. Carsten Hein on bass and Derek Scherzer on drums are a dream team you can just play anything, no limits or boundarys! I’m absolutely thrilled with the result and happy to present the audience our latest musical coup! To me, this album is my musical DNA , representive of who I am as a musician.

JBN: – What’s the balance in music between intellect and soul?

MK: – That’s a good question! In the best moments while playing music everything falls together, so there’s absolutely no difference between intellect or soul, love, passion or whatever. But to get to this point you sure need your intellect to understand the musical
grammar until it’s in the subconscious mind. In other words the better I know the material I’m playing, the less I need to think: Everything becomes free!

JBN: – There’s a two-way relationship between audience and artist; you’re okay with giving the people what they want?

MK: – Honestly, I have no idea what “the people” want. Every person is different, you can’t please everyone. So again, first I try to play what the music fan inside of me wants to hear. And I do believe that really good music has a way of finding its way to the people. It may take awhile, certainly some stylistic paths offer different kinds of resistance, but the chances will show up. I’m sure that really strong and sincere music resonates with an audience.

JBN: – Please any memories from gigs, jams, open acts and studio sessions which you’d like to share with us?

MK: – Every second of every gig is just something very special to me! It’s difficult for me to pick something out because it’s like one big thing for me. Every concert, every recording session, playing with different musicians, it’s just great everytime! If I‘m surrounded by sound and music I’m okay.

JBN: – How can we get young people interested in jazz when most of the standard tunes are half a century old?

MK: – Old or not, for the aspiring jazz musician, standards are a great way to learn about harmony, melody and rhythm. These pieces are timeless classics. At the same time, I encourage students to write their own songs influenced by their own cultural background based in the presence of here and now. Be yourself!

JBN: – John Coltrane said that music was his spirit. How do you understand the spirit and the meaning of life?

MK: – Music is my spirit, too. There is a “magic” factor in music and life, that’s for sure. Maybe the mystery of the process of making music remains one of its greatest appeal.

JBN: – If you could change one thing in the musical world and it would become a reality, what would that be?

MK: – Hey, how about a basic income for every musician and artist?! (ok, maybe we would become a little bit too lazy, who knows…)

JBN: – Who do you find yourself listening to these days?

MK: – Recently, I discovered the album Lovers by Nels Cline, sounds very personal and soulful to me, plus I love the orchestral sounds!

JBN: – Let’s take a trip with a time machine, so where and why would you really wanna go?

MK: – Ok, hearing Jimmy Bryant and Speedy West playing “The Night Rider” live at a gig in 1956! That must have been a blast!

JBN: – I have been asking you so far, now may I have a question from yourself…

MK: – How’s the local jazzscene in Armenia, Simon? Are there any Jazzclubs, musicians and Festivals?

JBN: – Thank you for answers. I mostly live in Boston and in Paris, but I certainly know Armenian jazz musicians: Tigran Hamasyan, Vahagn Hayrapetyan, Yervand Margaryan and more etc. and about the festival: Yerevan Jazzfest, which organizes the head of the jazz club Mezzo Kamo Movsesyan. This year: 07.11 will be performing Arturo Sandoval.